Elaine Kim wows the audience with her second performance of the night, “Calling You.”

After rigorous preparation, the talented Diploma Program (DP) music students  performed admirably at the DP music recital held on Sept 27. Out of the many brilliant musicians, Junior Matthew Kim and senior Elaine Kim took the spotlight.

According to So Yeon Kim, a Senior and supportive audience member from the recital, Matthew and Elaine were the two most notable performers. So Yeon recalled the night of the recital and said, “The most memorable performance was “Calling You,” sung by Elaine Kim in my grade. She was really awesome.” She continued, “I didn’t expect her to be that good. She’s  very talented; I’m looking forward to more of her performances. Her voice, although she denies it, sounds like Adele, as if it came right out of the studio.”

Elaine sang and played the guitar to “Calling You,” an Academy Award nominated song from the movie, “Bagdad Café.” So Yeon felt as if Elaine’s voice was like a ‘raindrop’: clear and fascinating.

“The student who really stole the show for sheer entertainment and audience engagement was Matthew Kim,” exclaimed Mrs. Lozano, who attended the show and took photos. “The enthusiasm and passion he demonstrated throughout his performance inspired me as a photographer to continuously take pictures of him.”

So Yeon felt the same. “Many students were good performers, and every student did his or her best. However, I really loved Matthew’s performance. He is definitely talented in engaging people. I felt like I was at his personal mini concert.” 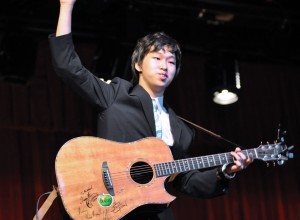 While Matthew Kim performs his favorite Beatles songs he stands up and encourages the audience to clap and sing to “Yellow Submarine.”

For Matthew Kim, the DP music recital was a time for him to show others how he regularly associated with music. As a Beatles enthusiast and skilled guitarist, he arranged eight different prominent Beatles songs into a single medley: out of the eight, “Let it Be” and “All You Need is Love” raised the members of the audience from their seats, who sang along to the songs. Matthew mentioned that the spontaneous and unexpected reaction from the audience was achieved through God’s help. “Before I played as the starter of the recital, I said, ‘In this recital, let us not only play music, but also glorify God…I believed that God would help me, and he did.”

Matthew admitted that preparing for his performance was not as intense or as strenuous as he had expected it to be. “Except for several days before the recital, I didn’t really spend much of my time practicing. The songs that I was going to play were the songs that I played regularly for fun. Music itself was already a part of my life.” Very confident and satisfied, Matthew remarked, “I am very proud of my performance, more than I have ever been before.”