Throughout November, “The Real Men of GSIS” made a fashion statement with their daily growing mustaches and raised thousands of dollars in support of men’s health through the Movember Campaign.

Movember is an initiative held every November by men all over the world who call themselves Mo Bros. They help raise awareness for men’s health issues such as prostate cancer.

“The Real Men of GSIS” is what the team calls themselves. Many of these men joined to support of their fellow colleague, Mr. Wiese. “This summer my father was diagnosed with prostate cancer. Movember has become a much more personal thing for me. In years past, I’ve been serious about it but I didn’t really know anybody that was affected, and now that my father is fighting it, it’s hit home a lot more,” commented Mr. Wiese.

“I knew Movember was happening, but I just thought it was a bunch of people doing something stupid like growing a mustache. When I heard Mr. Wiese talk about it [Movember] and he showed me the web site, I learned that it was for prostate cancer. I really wanted to get involved because prostate cancer is a big deal for men,” informed Mr. Harding, a third year Movember participant.

“Mr. Wiese keeps us organized and thinking about this cause that is really important to all of us. It’s been fun and nice to be involved in a good cause and having a good time with a bunch of cool dudes. Since my father is actually a survivor of Prostate cancer, it’s been easy for me be interested in supporting the cause,” related Mr. Vandermeer, a new Mo Bro participant this year.

“The Real Men of GSIS” is comprised of 22 members who are either GSIS staff, or family and friends of GSIS staff. They met their goal of raising $3,000 on Nov. 26 at 6:15 p.m. The donation which brought the team into the $3,000 mark was made by English teacher Elise Currier. This also, placed them in the top four percent of highest earning United States teams.

“I think Movember is a great cause and it is fantastic that so many people get behind it at this time of the year,” commented Ms. Currier. “I was really excited that my donation allowed them to reach their goal, but it is more important to remember that it wasn’t just me who got them there. Those men worked hard at growing those mustaches! More importantly, family, friends and those who care about finding a cure for prostate cancer also played a  large role in helping the ‘Real Men of GSIS meet their goal.” 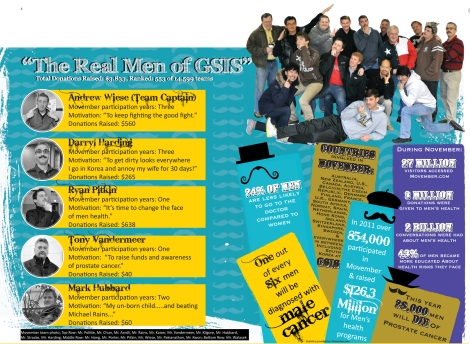 “My previous teacher, Mr. Wiese, who I consider one of the best teachers I’ve had; I always have him on chat and he shared a link on his status. I clicked on it and it went to a site called Movember. I asked him about it next day and he told me it was for fundraising for prostate cancer prevention for men,” explained senior June Park.

Furthermore, many of the GSIS women have donated money and made fundraising posts on their blogs and Facebook. Ms. Lyons, mentioned that she decided to donate to Movember because “for years and years all we hear about is women’s health especially with breast cancer and other issues. For the first time something that is an important issue for men’s health has been made known. I have seen too many of my own family members die because they waited too long for diagnosis. If I can in some way support guys to get checked early and often then it is a small price to pay. I love the mustached men of GSIS. I want nothing to happen to any of them, because they make a difference every day in this world.”

“It’s a good cause and I think the gentlemen look ridiculous in their mustaches, and if they’re willing to grow ridiculous mustaches for a good cause, then I’m willing to donate! Also, my dad had prostate cancer,” Ms. Plath responded when asked why she donated to the Movember cause.

The men start off on Nov. 1 with clean shaven faces and grow mustaches until the very last day of the month.

Since Movember’s start in Australia during 2004, it has spread throughout communities and countries. South Africa, Norway, S. Korea, Canada, and the United States are only a fraction of the countries involved in the Movember Campaign.

In 2004, the campaign raised $40,000. Last year, with its increasing participation and popularity, Movember raised $126.3 million.