On Dec. 7, 2012, the iPhone 5 was released in Korea and the Apple Corporation continued to gain wealth and popularity through its new and improved product.

“When I first heard about the iPhone 5,

I honestly wasn’t excited or expecting anything new…”

When I first heard about the new iPhone 5, I honestly wasn’t excited or expecting anything new since the iPhone 4S came out not too long ago. While other people were busy surfing the web for updated information about this new phone that would apparently be “amazing,” I didn’t give it any chance to impress me. As a user of both the iPhone 4 and the iPhone 4S, I didn’t think that the iPhone 5 would provide me with much. However, now that I have seen and experienced the iPhone 5 with my own eyes and hands, my thoughts have changed. In my perspective, the iPhone 5 is another successful product.

Many people expected the iPhone 5 to have greater video and audio quality, flaunt a thinner design, and be more light-weight. According to a friend of mine, these expectations were successfully met.

The iPhone 5 is the first of its kind to introduce a new charger known as “Lightning,” which is designed to charge your phone faster and provide a longer battery life. The iPhone 5 has a 4 inch widescreen multi-touch In-Plane Switching (IPS) LED-backlit 1136×640 native resolution, where as its predecessors only have a 3.5 inch 960×640 native resolution. By providing a higher resolution, the iPhone 5 acts as a touch-sensitive digitizer, which is one of the reasons why it is thinner.

While there are no significant differences between the camera on the iPhone 5 and 4S (both have a rear 8 megapixel camera, which includes support for 1080p 30 FPS video recording and Panorama mode), if you have an iPhone 4, you will notice a considerable difference in quality. Additionally, the iPhone 5 has a 1.2 megapixel, 720p “FaceTime HD” camera on the front whereas the iPhone 4S only has a VGA quality camera.

Toni Choi, a sophomore, claimed that she ordered the iPhone 5 as soon as it was released in Korea and was more than satisfied with its quality and new design.

However, even with all of the hype over the new phone, it did not come without some faults. Whereas the past models of iPhones used glass panels, the iPhone 5 saw the introduction of an aluminum panel. Although this made the phone noticeably lighter, it caused new problems. The new aluminum panel of the iPhone 5 is more sensitive t 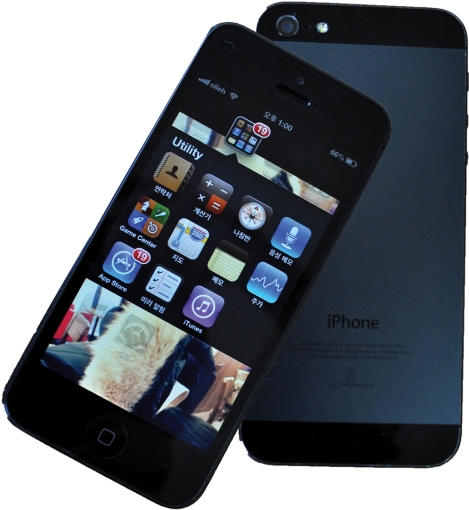 o scratches. The extent of the issue was sometimes so great that some consumers received their iPhone 5 damaged.

In addition, The iPhone 5 has its headphone jack on the bottom of the device. Some may see this as inconvenient, because they must now turn their phones upside down or bend the wire when listening to music.

Regardless, I think the positives far outweigh the negatives, which is why I hope to have an iPhone 5 in the very near future.