“My uncle used to be a soccer player so I always played soccer with him. And living away from my father, I spent most of my time with a soccer ball. It was the best friend I had.”

Influenced by humanitarian ambitions, his uncle the role model, and an intimate history with the sport, senior Jacob Son plans to become a professional soccer player by getting scouted and practicing hard.

“My greatest motivation would be my passion itself,” Jacob explained, “I cannot express in words how I feel when I am playing soccer. I just wish and dream to play at a professional level one day.”

Doing so, he says, will not only fulfill his dream but his uncle’s as well. His uncle became a fatherly figure to and a significant influence on Jacob after living with him for six years while his real father was away. His uncle’s initial goal was to become a professional soccer player, but because of opposition from the family he became a teacher instead. Hence Jacob hopes to make his uncle proud by fulfilling the dream he was unable to accomplish. 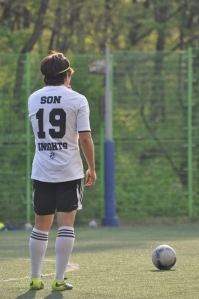 Jacob also has an intimate history with soccer, which he has been playing since he was six. He has played for the school’s team for six years and was the captain this season. He has played for the Suwon BlueWings Youth Team for two years, and the Inter-Suwon, a foreigners league in which teachers Mr. Wiese and Mr. Walasek also played, for three years.

From a young age, soccer allowed him to connect to and communicate with others. “I made friends through soccer, and learned that soccer can be played anywhere at anytime if we had a ball. Having a shy personality, I had a really hard time finding friends and communicating with people, but I think soccer opened up different ways to connect me with people.”

Propelled by such motivations and the dream to play professionally, Jacob practices to a rigorous schedule. “I wake up five o’clock in the morning and I go to the fitness room to do workouts. I usually stay after school and practice for an hour and a half or two and at night I go to the parking lot where I practice juggling, touches, and different moves.”

Despite difficulties, solid practice and preparation yielded positive results. This year he was scouted into Fordham University’s soccer team, though the process was was by no means simple, mainly because the college was so far from home. “I couldn’t call them at a specific time because of the time difference, so I had to stay up until three or four a.m. so I could call their office. Also, because they can’t see me play with their own eyes, I had to videotape all my games and practices so I could send it to them. After they saw me play on video, they’d ask me different questions and I had to answer.” 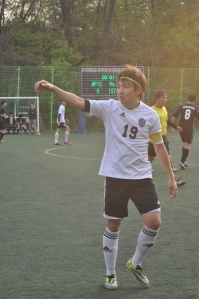 “I am a very positive person; if I fail I tend to be very optimistic and learn from my mistakes.” He said he would “get back up and learn to be consistent. I will never let up.”

He also looks up to a powerful role model, Cristiano Ronaldo, because he takes good care of his body and allots his profit to the poor. “Not only is he a great player,” Jacob said, “but he also puts a lot of time and effort into protecting his body and building his body to become a good player. Also, all his profits go to the poor people in Africa and all the people who need help.”

Plus, being charitable and helping the needy is yet another plan and goal for Jacob. “I really don’t care about my becoming the greatest player in the planet or my earning a lot of money or attracting all the attention. But instead I want to earn enough money to help a lot of kids in Africa.” He was inspired by the Korean movie “Barefooted Dream” in which impoverished African children had to play soccer barefooted. He also expressed that the VASE trip to Boracay where he played soccer with the kids made him feel like he “could really relate to them.”

A modest but dedicated player, Jacob has kicked off his career with an auspicious start and the right reasons: passion, humanitarianism, and an uncle to make proud. “To be honest, I am not that confident because I know there are many players out there that love soccer as much as I do, and there are many players who are more talented than I am. But it only means that I will work harder to match up with those who are competing at the higher level.”

2 thoughts on “A Heartfelt Sport: Why Jacob Son is Going Pro”