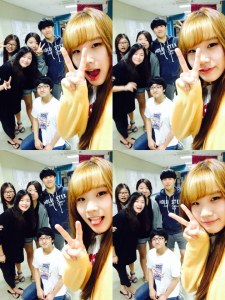 “But First! Let me take a selfie!” This  catchy phrase in Chainsmoker’s widely known song, “# (hashtag) Selfie” is not just a baffling joke people are making for their vines. It is actually an explicit portrayal of our supposedly narcissistic generation’s tendency to take selfies in monstrous rates.

Sarah Kil, in Grade 12 said, “I don’t like to upload pictures of myself because I feel narcissistic. It’s mostly just taking pictures with my friends. I put these good pictures of me as my Kakao Talk profile picture. I definitely use filters because they make you look good. I want to be honest. I don’t want to upload anything without a filter because it sort of looks gross.”

Kate Cho in Grade 11 admitted, “To be honest, yes I take a lot of selfies.  I just take it. With my friends, I would take it to leave it as a memory and just cherish that picture and moment. I want to check how I look. If I look pretty, actually, more attractive than usual, I would put it on Facebook as my profile and Instagram, Hash-tag selfie 🙂 I would get rid of my ‘chins,’ Cymera and liquify. I am being really honest. This is only probably a minimum of what girls do when sharing their selfies.”

Kate also shared, “If someone says, ‘Oh you look nice!’ I would like their comment and say that you look nice too. Because girls don’t want to admit the fact that they are pretty. They can’t be like, “Bro yea. I am the most pretty girl.” They are rather like, “Nah…” They are fishing for those compliments and returning some for whoever gives them the compliments they want. It’s like give and take. ”

Society is revolving around the impact of Generation Z, those born from 1995 and mostly around 2000. This Generation is known as the IGeneration, Gen Tech, or Gen Wii due to the heavy influence of the drastic technological developments. As past generations have coined, those including myself are thought to be apathetic towards society, extremely self-centered and indifferent to everything but ourselves.

I have regarded this statement with somewhat credibility, as 10 out of 10 students surveyed have proved that the number of clicks to check their Facebook notifications were immeasurably greater than those of visiting news sites.

Regardless of the uncontrollable selfie boom and tendency to actively interact in Social Network Systems (SNS) to ornate one’s self-identity, those in Generation Z have been proved not to be morally downcast. We might be overly-attentive towards our looks, and how others view us due to the drastic technologically developed era we were born in. Yet, we have not lost the moral decency our previous generations are worrying about.

Sarah agreed, “Sometimes I do think that our generation is narcissistic, but then again I think it applies to everyone. Even in the ancient ages, kings would cut off people’s heads just because they did not like them. I think that is really narcissistic. I think there is definitely less fear towards other people, but in the end, everybody will be narcissistic.” Sarah continued, Older people just don’t know that they were or are selfish. Everybody is selfish though.”

Samuel Kim, in Grade 12, a previous GSIS student now in Tasmania, Australia commented, that while he does not believe his generation is uncaring he does think that“As social media improves and people really communicate through social media people have become a bit more narcissistic. They like how they look after Photoshop and want the attention.” 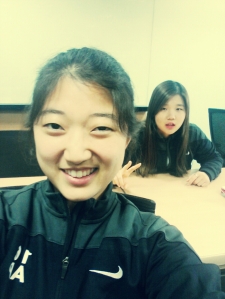 When the interviewees were given an analogy to test their moral standards, a surprising result flipped the controversy over whether Generation Z was egomaniacal or not. Interviewees were asked to contemplate over whether they would choose to go to an important meeting that could lead them to achieving their ultimate dream in life, or help an old grandmother struggling to go across the street. All interviewed unanimously answered that they would help the grandmother.

Some suggested an alternative plan so that they could help the old woman across the road while reaching their ultimate dream.

When the analogy was deteriorated to more extreme terms, such as having a child fall off a tree, Samuel’s answer changed. Instead of trying to maintain his chances of getting a golden ticket to his life success, he said he would definitely help the child, “I wouldn’t even think about it. I would definitely run to the child. I personally think that becoming a doctor (my dream job) is less important than somebody’s life”

All interviewees chose to help others over gaining personal enchantment. This proved that our Generation, the notoriously pinpointed narcissistic, selfie-crazy age group was simply developing along with technology.

We like taking selfies, hanging out with our friends virtually, and being more attentive towards our appearance with media focusing more on beauty. However, this has not contaminated our morale: instead, it changed us in Generation Z to become more mature intellectuals who value human interaction just as much as we value ourselves.

2 thoughts on “But First! Let me take a selfie!”