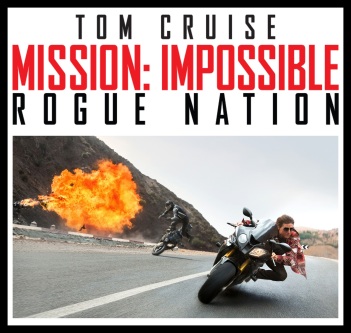 It’s Mission Impossible: Rogue Nation, and super-agent Ethan Hunt is at it again. This time, Hunt is after the Syndicate, a massive international criminal consortium that’s been wreaking havoc through terrorist attacks and assassinations. With the Impossible Mission Force (IMF) in jeopardy, Hunt, along with skilled former fellow agents and a talented British spy, must escape torture chambers, retrieve compromising files, and infiltrate the Syndicate, all the while trying to keep important lives safe.

When you talk about Rogue Nation, it’s impossible to leave out the hyped opening scene in which Tom Cruise clings to the side of an airplane as it takes off into the sky. It’s a feat amazing enough that you can’t help but wonder exactly how far Mr. Cruise would go for the viewers’ pleasure. The stunts and action sequences, of course, don’t stop there. For the next two hours, Cruise swims through underwater chambers with powerful currents and hurtles across rocky highways on a motorcycle.

A remarkable highlight of this film is Rebecca Ferguson and her strong female role as Ilsa Faust, a top-notch British spy. Throughout most of the film, her true motives remain ambiguous as she nimbly switches from Solomon Lane (Sean Harris) to Ethan Hunt, flitting between both to fulfil her own interests. Another high point is that Cruise appears to be comfortable with Ferguson, a contrast to his previous character in which he came off as less romantically agile and more self-amused.

Another memorable character is Simon Pegg’s role as Benji Dunn. Pegg’s comic relief is impeccably timed. In the opening scene, Cruise, pelted by high winds and on the verge of losing his grip on the plane, begs Benji to open the plane door. Benji complies with a proud “Ha! How’s that?” only to have opened the wrong door. Hunt screams, “That’s the wrong door!” Easily the funniest scene in the movie.

Pegg is featured in another hilarious scene when his character nearly gets caught playing Halo at work to Mozart’s Marriage of Figaro. With a swift movement of his fingers and knee, the screen is switched, the drawers are closed, and the viewers chuckle.

Speaking of Mozart, various critics have also remarked that the movie is adroit in its use of classical music, a rare feat in Hollywood blockbusters. The New Yorker notes:

This injection of Mozart into the impeccably all-American, hyper-masculine world of first-person-shooter games upends Hollywood convention so completely that the film’s writer-director, Christopher McQuarrie, has to be thumbing his nose at it. Granted, Simon Pegg, who plays the Benji character, is British. To place an American in the same position might have caused audiences to freak out.

From heart-stopping stunts to fresh characters to a good soundtrack, Mission Impossible: Rogue Nation definitely contains all the requisite elements for a great action movie.