Greetings GSIS Knights and Knights Fans! Once again, we are thrilled to announce that GSIS has been announced as finalists by the National Scholastic Press Association (NSPA) for ‘2015 Picture of the Year’, ‘2015 Design of the Year’, and the ‘2015 Cartooning Award’.

The ‘2015 Picture of the Year’ is competing against nine other schools in the category of Junior High/Middle School. The beautifully dynamic photo of Jaewon Min measuring the temperature of milk in science class was taken by class of 2015 Alumnae, Toni Sangji Choi who is a first year student at Rhode Island School of Design (RISD) and is majoring in photography. Rhode Island School of Design is the ranked third in top schools of Photography.

Additionally, GSIS class of 2015 Alumnae, Cynthia Chaelim Lee is a finalist for the ’2015 Design of the Year,’ in the category of Illustration and ‘2015 Cartooning Award,’ in the category of Editorial Cartoon, for her visually creative and emotional Illustration of the reigning kings of the internet (Twitter, Facebook, YouTube, and Google) seated on a throne of the tired and worn limbs of internet plebeians.  Her illustration was paired with Co-Editor-in-Chief, Victor Jeong’s article: ‘Why Our Internet Might Die as we Know it.’  Cynthia is also a first year student at RISD and is majoring in Illustration. 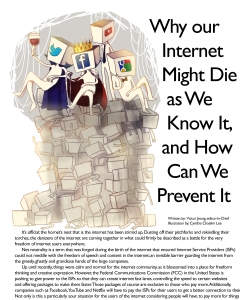 We are thrilled and honored to be finalists and encourage you to join us in celebration. Winners will be announced at the JEA/NSPA Fall National High School Journalism Convention in Orlando, Florida, USA, on Nov. 12-15.

Any GSIS student interested in being a part of this process can feel free to join the Publications (yearbook and newspaper) class when you enroll for your 2016-2017 school year schedule at quarter one Parent Teacher Conferences . You can contact the advisor of the class Mrs. Lozano. Go Knights! Press Release: