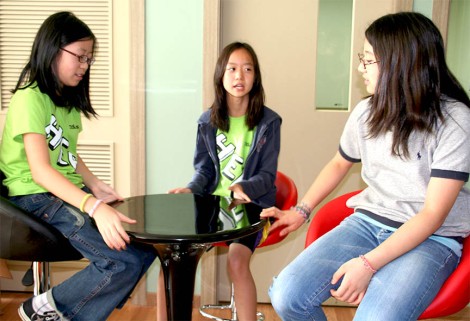 2009-2010 SEW- Photo of Hanna Nam, Olivia Jeong, and Angela Park. Angela is now an alumni and Hanna is in her senior year of high school. Hanna is author of this article.

When I think back to my first day of middle school, I remember being nervous but excited for a completely different school year. It was the first step in becoming an adult, independently driven and self organized. However, I was faced with many changes that troubled me. The bell schedule was confusing with different classes and blocks, which made me wonder how I would be able to memorize it. The classrooms were scattered around the school, which required me to run up and down the stairs. However despite my worries, I was able to adjust after a short while, and enjoyed the rest of my school year. Now that I am a senior, I wonder if what I felt in sixth grade is still the same?

Now that we are three months into school, the hallways are filled with students trying to get to class. Out of the many students, sixth graders appear especially agile in the hallways, confidently sweeping around the school as the rush from class to class. They no longer have confused expressions on their face when I see them in the hallways. Yet, they did face challenges just like I did when I was their age.

They confronted and still confront the difficulty of changing classrooms, challenging assignments, and growing expectations. The International Baccalaureate (IB) describes this transition between the Primary Years Program (PYP) to Middle Years Program (MYP) as supportive of each other. Despite the transitions of programs, the PYP provides a strong foundation for the MYP. The PYP is transdisciplinary, which goes across different subjects to create a curriculum for elementary students. Similarly, the MYP is interdisciplinary, which seeks to integrate two or more subjects together.

The sixth graders discovered an upgraded academic environment, but also were able to join a variety of clubs including lower secondary sports. The advancement from PYP to MYP may lead to pressure and stress within the students, the current six graders seem to be adjusting quite quickly.

James Huh explained, “We have summatives and formatives which are different than just homework.” He continued, “But besides homework, I am able to join a wide variety of clubs and sports. They let me forget about all the things I have to do.”

Jennifer Lee said, “I have to spend more time on homework than I did before. It makes me feel really tired but it is something I need to do.”

To support the students and lessen confusion, teachers upload assignments, files and documents on Schoology. Sixth grader Joseph Park believes Schoology is “helpful in reminding” him what to do. “Sometimes I would forget what homework I had that day, but if I go to Schoology everything is there. Also textbook files are in Schoology, so I don’t need to carry heavy textbooks.”

Additionally, GSIS seeks to smoothen the transition by annual ‘Transition Days’, which is a day during the school year when fifth graders are able to enter and observe six grade classes. Fifth grade students participate in lessons, interact with six grade students, and gain insight into what they will be facing the following school year.

When asked about the transition day, Leewon Koo responded that it was very helpful. “Last year I had no idea what middle school would be like. I only knew that it would be much harder than what it was in fifth grade. The transition day helped me to realize that sixth grade was not that bad.”

Jennifer explained that during transition day she was able to see what sixth graders were learning and what they will learn later.

Each year is a fresh new start for the new MYP students. So if you see a sixth grader in the hallways, say a friendly hi to support, welcome, and build their confidence as they deal with the difficult trials of adjusting to the MYP and the chaos of being a secondary student.