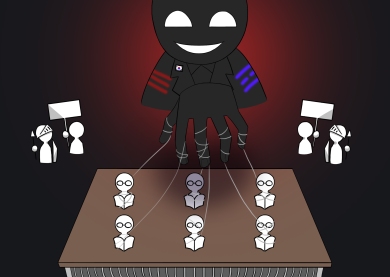 On Oct. 12, the South Korean Ministry of Education announced that the government would begin using government written history textbooks starting in the 2017 school year. Calling these new textbook “Accurate” History Textbooks, the books supposedly does not mention the Geochang Massacre and does not make former President Park Chung-Hee’s dictatorship seem softer. It also puts events that occurred during the Japanese occupation of Korea, particularly from 1937-1945, in brighter light for the Japanese, provoking outrage from the South Korean population.

Trying to justify the changes, President Park mentioned “We should not teach students defeatism. Former descriptions made students feel shameful for being born in the Republic of Korea.” This statement is however ironic, since the new textbooks are more positive to the Japanese occupation, claiming the occupation was actually beneficial.  In fact, I feel ashamed for being born in the Republic of Korea not by the so-called defeatist descriptions, but the fact the government had the guts to break the South Korean Constitution Article 31.

4. Independence, professionalism and political impartiality of education and the autonomy of university shall be guaranteed under the conditions as prescribed by Act.

Under this Article’s sub-clause, I would assume that whatever action the Park administration is taking right now should be unconstitutional. This is obviously not the case, as the Seoul Lower Court and High Court has ruled that the changes are allowed under the Constitution. Due to these rulings, the issue is headed towards the Supreme Court, where it will decide whether the Park administration broke the Constitution or not.

Textbooks and education of young students shouldn’t serve as a platform that the government could use to push their own political agenda. This is particularly true for history, as even though history should and can have some subjectivity, should try to be as objective as possible. By distorting history to fit the ruling government’s political agenda, it accomplishes nothing beneficial, and only harms the students that are learning this distorted history. When The Telegraph’s Education Editor Graeme Paton covered the issue of politicians distorting history, he got the opinion of Contemporary History Professor at King’s College London, Pat Thane. Pat Thane expressed the point, “Bad history can create real problems by distorting understanding of contemporary issues when politicians and others use history as a rhetorical tool to conjure up past golden ages, appeal to founding fathers or simply to rewrite it for political ends”.

The Korean government tries to push off different viewpoints, eliminating diversity. They marched into this program, claiming they will get rid of bias. What they will accomplish is not getting rid of bias, but replacing a bias with another bias. As Professor Thane mentioned, if we do not possess a diverse historical view, we will never be able to solve problems, as we as students will only have one answer. The answer that is only approved by the government. And the answer provided by the South Korean government is stupid.

What the biggest crime in this whole ongoing incident is the fact these history textbooks are written by the politicians, whom according to history professor at USC and author of “A History of Korea – An Episodic Narrative” Hwang Kyung Moon (황경문), “very few of whom, if any, have received academic training in history.” This is an extremely scary notion that should frighten not just the students, but the whole general population. Just imagine yourself at the hospital, requiring an organ transplant. The organ is there all healthy, but the surgeon that would be performing the surgery tells you before the surgery, “I’m an art major, but don’t worry.” I would wager that you would not let this “surgeon” to come even close to you with a scalpel and forceps.

What makes this issue really puzzling and funny is the fact the textbook publishers before this new policy had to be approved by the government before publication can happen. Short words, they approved the information that they claimed was “brain washing” the students to admire North Korea.

While this issue is yet to be resolved, this issue should concern people of South Korea, even if they’re conservative or liberal. If the case is ruled in favor of the South Korean government, it would be set as a precedent and allow the government to change and censor information whenever they want.