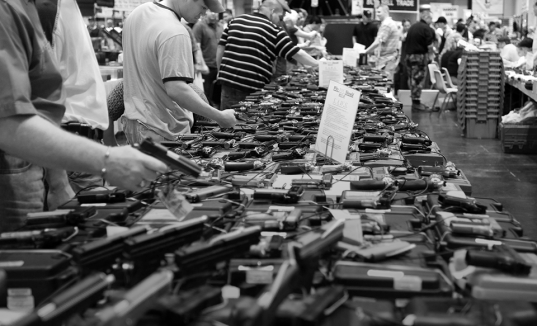 Guns, Guns, Guns. What is the Problem?

Guns. Guns, guns, and guns. And yes, I am going to talk about something that possibly one of the most controversial issues in America. These small or large items can be an instrument for personal safety or weapons of destruction. The debate and controversy over gun usage and rights continue as deaths caused by guns continue to stack up. Because of this, Gun policy and safety issues can be viewed anywhere from a radically conservative to a radically liberal viewpoint, which makes it hard for individuals to agree. However, I have something different that can contribute to the issue. It is the outsider’s view.

As an outsider, guns are not something I see everyday. In South Korea, it is illegal for individuals to possess guns, and only are allowed if authorised by the government. I only ever ‘see’ them in movies or television shows, so to see individuals in America have fairly easy access to guns startles me. It is even more scary to see people openly carrying guns in some states. Who knows if someone might just randomly shoot you because they feel like it? In Korea, people even joke about how in America you might just get randomly shot on the street.

Gun carrying rights originates from the Second Amendment, which states that “A well-regulated militia, being necessary to the security of a free state, the right of the people to keep and bear arms, shall not be infringed”. Although one must be of 21 years of age to possess a gun, the specifics for carrying a handgun in public vary by state.

‘If there are set rules to enforce gun possession, and if it is even protected and guaranteed by the second amendment, what is the problem with carrying guns?’, you might ask. Statistics from FBI show that 70% of murder in 2014 alone was caused by firearms. An average of 90 firearms are used per 100 citizens, making America the most heavily armed nation in the world. Even though the large population of USA must be considered when putting these facts into perspective, the danger of murder by firearms is still a serious threat.

On Oct. 1, 2015, a gun shooting incident occurred at Oregon Umpqua Community College, which resulted in ten deaths and seven more injured. The shooter was Chris Harper Mercer, a 26-year-old man living near Umpqua college. It was reported that the shooter would threaten individuals to answer his question, “Are you a Christian”, and shot them if they said “yes”.

Regarding this issue, The Guardian reported that President Obama urged individuals to agree on implementing “common sense gun laws” that restricts gun ownership. In a press conference after the shooting occurred, he described gun shootings as a “political choice that we make to allow this to happen every few months in America.” He continued, “Yet we have a Congress that explicitly blocks us from even collecting data on how to reduce potential gun deaths. How can that be?”

However, according to The Guardian, Douglas County Sheriff John Hanlin disagreed with his opinion, and described the proposed gun control as an “indisputable insult to the American people” in a letter to the Vice President. He claims that Gun control is “NOT the answer to preventing heinous crimes like shootings”.

These are two very different sides of the argument, to either restrict gun ownership or keep them.

What Do I Think?

Firstly, neglecting all possible change and reforms to improve the current gun possession laws may not be effective in the long term. At first, there might not be any visible changes to the situation. However as time passes, I believe that the effects of the modifications will come to light.

Additionally, although laws may be enforced and debates may continue, I believe that there needs to be changes within the people’s perception of gun ownership. Guns are not something that should be taken lightly. They are not toys. Every bullet shot by a gun has potential to take away someone’s life. Thus, if they are used by the wrong person with negative intentions, its basically going down a path of evident doom and destruction. They can become the deadly tools to achieve personal agenda.

Another factor to consider is the symbolism behind firearms. To many Americans, a gun is a symbol of independence and freedom that their predecessors rightfully obtained. People may also carry guns to ‘look cool’ or because it is a guaranteed right. But have they stepped away for a moment and thought about the reasons why they are allowed such privileges? And also about what consequences can arise from misuse of guns?

A reason why gun possession is so widespread may be because citizens aren’t able to fully trust their governments to protect them. If someone feels unsafe, why wouldn’t they take opportunity to arm themselves for their own safety? Thus, protection for citizens against threats should be strengthened at a federal and state level as well.

Governments should not take away guns from individuals, but take them away from individuals who misused guns. A possible way to achieve this are background checks and strict monitoring of gun possession. This may be a lot of work, but for an instrument that can instantly kill someone, this much check-up should be necessary.

Regarding this issue, President Obama issued an executive order which expands background checks for gun buyers and that individuals selling firearms register as licensed gun dealers. However, Donald Trump, a Republican Presidential Candidate quickly refuted President Obama’s actions by vowing to “unsign” this executive action if he gets elected president. Trump states that the executive order is “an assault on the Second Amendment.”

What do You Think?

Weapons such as guns are important for individual’s own safety. However by viewing such tragedies, setting guns aside until the most necessary situation might be something to consider. It will be a great challenge to see change not just in law reforms, but within the citizens’ as well.

We must remember what Uncle Ben said, “With great power comes great responsibility.”