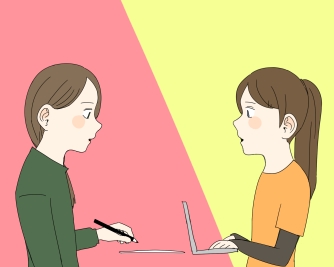 It happens to so many students, an essay is due and then ‘poof’, the computer crashes. Technological errors happen all of the time and this raises the question should students use a computer, should they complete their work by hand, or is there some other middle ground that should be approached?

During school, some students prefer to use the computer while some prefer to hand write. Lindsey Choi in tenth-grade said, “I prefer taking the notes by pen and pencil or writing them down so that I can get every detail from the presentation in my notes.”

Whereas, another tenth-grader Sarah Uhm said, “I prefer taking notes with my computer because its easier and quicker. When you write it with your hand you can only write bullet points and your hand isn’t that fast. But, if you write it with two hands on a keyboard its quicker so you can get more detailed notes.”

There are advantages and disadvantages to using the computer or hand writing. For example, a computer can help with research, but it can also create distractions such as using Facebook or gaming.

Jessica Oh in twelfth-grade said sometimes she forgot to save her files on her computer which made her have to do her work all over again.

Some other students had similar experience to Jessica and that is why some thought that analog (writing) is better than digital. Nevertheless, analog study has some limitations as well because it has little information and it takes a long time.

According to these values and limitations some students preferred to mix both types of studying. For instance, eleventh-grader Claudia Choi said she uses the computer to take notes in school and then later memorizes them by handwriting. Furthermore, when she has enough time she goes to home or to a reading room to memorize those notes that are saved in Google Docs or Microsoft’s OneNote.

When some of the students first came to school they did not like the fact that computers were used while some liked it. Lindsey Choi didn’t like it because she was used to taking notes and completing worksheets on paper. Using a computer was new to her, so it took her some time to get used to it.

Sarah Uhm said she was happy with it even though it took her a long time to use the computer. She only used PC computers and computers with the Korean keyboard, so she had trouble with typing in English and getting used to where the letters were. However, she still enjoyed it because she got better later on.

Throughout the school year, most of the students had at least one tragic experience with their computer. This ranged from not being able to save work to having a hard time with memorizing vocabulary or writing notes down.

However, an article in Scientific America states that “new research by Pam Mueller and Daniel Oppenheimer demonstrates that students who write out their notes on paper actually learn more.”

In Contrast, an article in The Wall Street Journal said “people who take class notes on a laptop do take more notes and can more easily keep up with the pace of a lecture than people scribbling with a pen or pencil, researchers have found.”

With such contradictory research, it might not be important to use only digital or only analog, it’s the fact of which one can be more helpful to the individual. It is recommended and encouraged by teachers that students find their own way of studying.

“I want my students to take notes with whatever makes them most comfortable. If it helps them to write, then they should write, if it helps them to use a computer then they should use that. I even encourage students to use their iPad and phones to take pictures of notes I put on the board or projector,” said visual arts teacher Mrs. Lozano. She continued, “Personally I study best by taking notes on my computer and then I write on a piece of paper or with a white board marker on a mirror so I can repeat and retain information. It’s not always about what other people do, but what works best for you.”