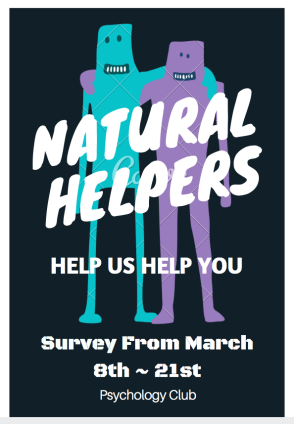 In just under a month Psychology Club will launch Natural Helpers, a program to reach out and help students with their psychological states and issues.

The purpose of the Natural Helpers program is to select students who their classmates think are natural helpers, and teach them how to become better helpers within the student body. The selected students, who will be named Natural Helpers, will be taught how to lead others in different situations that may occur in the community.

“I’m hoping that we will become more visible to students so that if there’s any need, we will be just right there for them to contact and get some help from,” said Mrs. Park, the Psychology teacher and supervisor of Psychology club.

The Natural Helpers will be trained to be role models and to use their different skills to tighten the school bond. The overall goal for the program is to create and enforce a friendlier and safer school environment.

“We have a counselling department that does an amazing job guiding students but I think students can help each other probably much more effectively than maybe teachers,” said Mrs. Park. She says this because “students are with one another more closely after school, in classrooms, and activities; you have greater access to each other.”

As students themselves, the members of Psychology club realised that students can help each other in a more personal and comfortable environment. The club believes that since students can understand and relate to each other more than teachers, it will be most effective to train the students who are already interactive amongst the school community.

Likewise, the club thought that since friends already approach each other to talk about their problems, helpers will be able to provide better aid to their friends if they are trained through the Natural Helpers program.

“We really want to equip the Natural Helpers,” Mrs. Park emphasised, “they are already identified as helping people in students’ lives, but we want to better guide them so that they are better equipped to help each other out.”

Natural Helpers will be skilled to guide and encourage their fellow classmates in common student issues such as stress, peer pressure, loneliness, or even depression and thoughts of suicide.

“We have quite a number of capable natural helpers on campus, so I think we’re going to have a great time,” Mrs. Park assured.

“By forming this healthy group of people, individually and as a Natural Helpers community, we want to be able to help out students on campus if there are anyone who are in need,” she added.

Through a survey that will be available from Mar. 8 to 21, the Psychology Club will use the polls to select students to recruit for the program. The survey asks for the names of natural helpers in the community and for common issues that students face. The link to the survey has already been sent out in an email by the Secondary office.

“This is all about students and the more students participate in putting in their thoughts in the survey, the more information we have and the better chance of us selecting specific students to help our student body,” said Mrs. Park.

Selected students, who will be announced by early May, will then be trained in different areas on how to help their fellow classmates with their psychological concerns. The training will start this semester with the first retreat in May and the program will continue on to the next school year.

Anyone with questions can contact Mrs. Park or any of the Psychology Club members.