This fall season, GSIS’ varsity boys’ and girls’ tennis teams finally played at conference games and tournaments after three years of none due to COVID-19. The knights faced many challenges, but they fought fiercely until the end. As a result, the boys placed 6th, and the girls placed 7th overall in the KAIAC blue division.

Tennis is a racket sport that is divided into two match styles: singles and doubles. As the name suggests, singles is where a player plays one-on-one with another player across the net. On the other hand, doubles players form pairs of two and play against other pairs. Individual skills are indeed important, but it is crucial to have a strong mentality: players contend that tennis is 20 percent physical and 80 percent mental. Unlike other KAIAC sports, there are no referees. Instead, the students are all expected to practice good sportsmanship and make fair calls.

This year’s tennis season was an irregular season for our tennis players as the blue and red KAIAC divisions were combined. This resulted in an enormous blue division with both very strong teams and more average-skilled teams. The season started off with friendly games against Chadwick International and Seoul International School. Jiwoo Kwak, the captain of the girls’ tennis team says, “Chadwick and SIS have always been challenging opponents, so the friendly matches with them at the beginning of the season were good opportunities to prepare ourselves for our real matches.” Although our knights did not win, they were able to recognize their weaknesses and correct them through this experience.

After lots of practice, the teams competed in their conference games at schools across South Korea, all the way from Song-do to Daegu. These are the scores from this season: 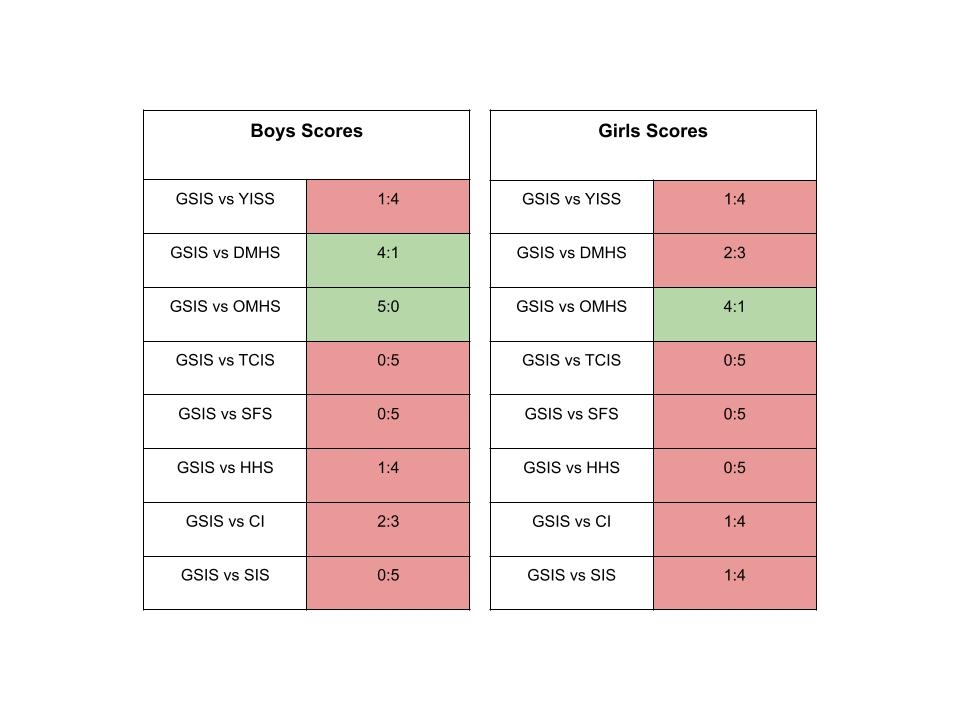 The majority of both teams were made up of newcomers who had never even held a tennis racket prior. This was quite a struggle at first as many athletes had to learn everything about the sport from the start— from learning how to hit a ball with a racket to the complicated rules of tennis. On top of having many students starting the season on a blank slate, almost everyone had small injuries throughout the season that held them back from giving it their all. The biggest obstacle the girls’ team faced this season was that they had to play most of the games without one of their captains, Jiwoo, as she injured her ligament badly during one of the early season practices. Mr. Albert Lee, the girls’ head coach says, “I didn’t expect Jiwoo to be injured, so I was very worried at first. However, through this experience, our doubles players got to experience playing singles and were able to experience the excitement of tennis.”

Due to Jiwoo’s injury, the girls’ team was led by myself, Noa. Athletes from other schools might be surprised that a freshman not only played singles but was also one of the team’s captains. When I was first appointed as the team captain, I was worried that I would not be able to fulfill the role— I had never heard of a ninth-grade captain at other schools or in other sports, and I never expected becoming the team captain so I couldn’t say that I was “ready”. However, throughout our many games, I gained confidence in leading a team and even accomplished many achievements. By the end of the season,  I had the most game wins in our school, received an all-conference badge, and was awarded the girls’ team’s Most Valuable Player (MYP) award. My coach stated that having a ninth-grade captain motivated younger athletes and encouraged them to be more enthusiastic about games.

At the end of the season, the lady knights ended up winning the sportsmanship award— an award voted for by other schools in the league. Both of the girls’ coaches proudly expressed that this award is the most important award because, while skill is something that can be improved and adjusted with effort, sportsmanship is the attitude and behavior of the team— something that cannot be changed easily, as this aspect is up to the team members’ values.

The performances of the boys’ team consistently fluctuated— one day, they would win 5:0, and the next day, they would lose 0:5. David Park, one of the boys’ singles players says, “This year was a phenomenal year for us; everyone in the team had some amazing games. We all improved a lot compared to the beginning of the season. Though we had multiple ups and downs, overall, it was a great season.”

Although both teams’ performances were not as satisfactory as some may have hoped, overall, everyone improved their skills and knowledge in the sport massively.